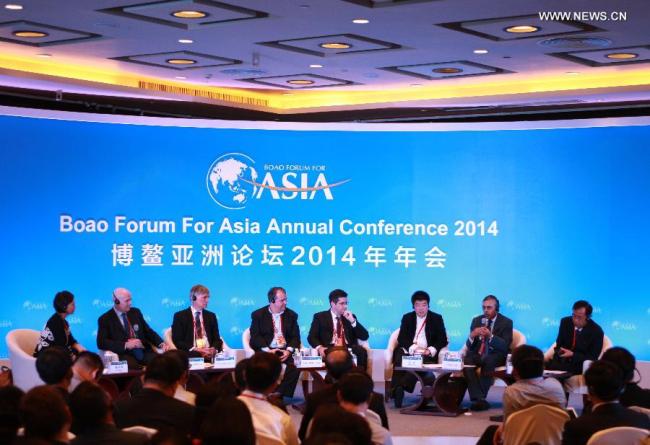 The forum “E-Commerce vs Traditional Commerce: Zero-Sum or Win-Win?” is held during the Boao Forum for Asia (BFA) Annual Conference 2014 in Boao, southChina’s Hainan Province, April 10, 2014.

Christopher Lu, chief partner of Deloitte Touche Tohmatsu, said Li confidently shared his view on China’s future development and reform in his speech during the opening ceremony of 2014 Boao Forum for Asia.

“The trading partnership among countries in Asia will benefit the investment environment in the whole region,” he said.

“China used to be an observer of the world’s trading groups.Gradually, it became a participator in the game, and now it’s time to become the leader,” he said.

“The trading volume in Asia is huge. We need to create fair game rules for this market.”

He said the path of China’s reform is difficult, but the determination from the leaders is firm. The slower growth of China’s steel demand in 2014 and 2015 was keeping with the country’s economic development level as an industrial producer and reflected its change of economic model, said a senior official of an international industry association on Wednesday.

After a 6.1-percent growth in 2013 with support from government infrastructure investment,apparent steel use in China was expected to slow to a growth of 3.0 percent in 2014 to 721million tons. In 2015, the steel demand growth is expected to further fall to 2.7 percent to 741million tons, according to the Short Range Outlook published by the World Steel Association(Worldsteel).

“It still grows in a positive way, but at a slower pace,” said Edwin Basson, director general of Worldsteel, pointing that the amount of China’s steel demand in the coming two years was still”incredible.”

Worldsteel forecasted that global apparent steel use will increase by 3.1 percent to 1.53 billion tons in 2014 following a growth of 3.6 percent in 2013. In 2015, world steel demand was predicted to grow further by 3.3 percent and reach 1.58 billion tons. China’s consumption was almost half of that of the world.

Basson said that the reason for the slowdown of China’s demand growth was the shift of the Chinese economy from being investment driven to consumer driven. “We have pretty much seen the process taking place in China that the government is stepping back from very large investment programs,” he said. Toyota Motor Corp will recall 6.58 million vehicles globally to fix faults in the steering and seats, a company draft statement showed on Wednesday, in one of the largest recalls to date in the global auto industry.

The world’s biggest automaker is recalling certain Yaris, Urban Cruiser, RAV4 and Hilux models after identifying faults in the steering column, wiring harnesses and seat railings of 1,058vehicles. The Yaris is also sold as the Vitz and the Urban Cruiser under the Scion brand as the xA.

The recall tally was preliminary and subject to review until a formal announcement in Japan later on Wednesday, a Toyota representative said.

The recall covers models of the Yaris subcompact and Urban Cruiser SUVs assembled between January 2005 and August 2010 as well as RAV4 SUVs and Hilux compact pickups made between June 2004 and December 2010, Toyota said in the statement.

It said 825,000 of the affected vehicles were in Europe but that it was not aware of any accidents related to these faults.

It was not immediately clear if the faults were due to design or manufacturing issues.

China and Laos pledged on Tuesday to speed up negotiations on railway construction, with an aim of signing agreements “as soon as possible”.

Li characterized the Sino-Laos railway as the focus of a major ongoing cooperative effort, and said that China hopes an agreement can be reached “as soon as possible” to set the stage for even more.

Thongsing said Laos also wants to see the rail project yield concrete results soon, as it will enhance cooperation in other sectors.

Laos is one of China’s prime target markets, as the world’s second-largest economy activelypromotes its railway technology and construction expertise overseas.

A rail line connecting Kunming, the provincial capital of Yunnan, with Laos is included in China’smedium-and long-term railway network plans, according to China Railway Corp.

The Export-Import Bank of China agreed to provide loans for the construction of a rail line linkingthe border cities in Yunnan to the Laotian capital, Vientiane, the Vientiane Times quoted LaotianDeputy Prime Minister Somsavat Lengsavad as saying.

Both Li and Thongsing Thammavong will attend the Boao Forum for Asia Annual Conference2014, which takes place from April 8 to 11.

Founded in 2001, the BFA is a nongovernmental and nonprofit international organization committed to regional economic integration and bringing Asian countries closer to their development goals.

The emergence of Internet finance in China is providing more funding channels for small and medium-sized enterprises, but that’s not necessarily good news for all lenders in the domain.

Emmanouil Schizas, senior economic analyst of the Association of Chartered Certified Accountants, an international professional organization, said major consolidation might be on the way for China’s vigorous Internet finance sector, which has by his count “tens of thousands” of small companies.

”If  you look at China’s peer-to-peer lending sector, there are probably 1,000 firms. But ideally there should be two or three players. The amount of consolidation the sector will have to undergo anyway is enormous. Media reports say that 90 percent of them will fail by the end of the year. But even (100 left) is way too many,” said Schizas.

The way to survive, he said, is real differentiation, which means finding specific niche markets in a vast business population.

”The test for survival is whether they do anything different in terms of the four raw materials of business financing: information, control, collateral and risk appetites,” said Schizas, who is also acting head of the ACCA’s small business policy team based in London.

Emerging economies are being challenged by an external environment that is less supportive compared with pre-crisis period and internal factors are also making growth slower in many countries, said the International Monetary Fund (IMF) in a new research on Thursday.

“In contrast to the favorable external environment that existed before the crisis, during the next few years, emerging economies will need to navigate through conditions that will be less conducive to growth,” the IMF said in an analytical chapter of World Economic Outlook report released on Thursday.

On the one hand, emerging economies will be supported by higher growth in advancedeconomies even though it is accompanied by higher global interest rates.

On the other hand, the Fund noted, the expected slowdown in China and somewhat tighterexternal financing conditions will weigh on emerging economies growth.

In contrast, others have argued that improved economic performance of the emergingeconomies was underpinned by structural reforms and strong macroeconomic policies.

“The reality could indeed lie somewhere between these competing views, wherein positiveexternal conditions provided emerging market economies with the opportunity to strengthen theirpolicies and reforms, and although growth may soften with the unwinding of these conditions, itwill remain strong,” said the IMF.

In an accompanying blog, writers of the report noted the recent slowdown in emerging economies appears to be as dependent on internal developments as those from abroad. And the priority for policymakers now is to ”better understand the role of internal factors and assess whether there is scope for policies to improve these economies’ resilience regardless of the external backdrop.”

Good news! GongChang.com Japanese Edition (http://jp.gongchang.com/) has been officially launched! Thank you for your supporting all the time!

Worldwide factories, all in gongchang.com! If you are ready to start a wonderful business journey with us, Join Now!

The development and reform commission of Xinjiang Uygur autonomous region on Tuesday introduced new policies to help with the development of special economic zones in Kashgar and Horgos, two border cities along China’s northwestern frontier.

Financing difficulties in infrastructure construction and a lack of investment have troubled Kashgar and Horgos since economic zones were set up in the areas in 2010. Newly approved measures will hopefully offer solutions to breaking the shackles of the system.

The document clarifies that the two management committees of the zones are allowed to exercise administrative powers and coordinate and guide departments in the economic zones.

Preferential financial and taxation policies are also being put forward by both regional and local governments. A subsidy of50 million yuan ($8 million) will be allocated to the two zones separately each year for infrastructure construction.

In addition, funds will be set up to support industry, motivate talents, finance scientific research and encourage entrepreneurship. The introduction of equity incentives will look to attract scientists and management professionals.

Total local incomes during the ten years starting from 2012 to 2021 will be for the two management committees to use to support construction of the economic zones and industry development.

Chinese car makers have started to steer more business toward the Brazilian market due to growing appetite for cars in Brazil and booming vehicle production in China.

Central China-based Jianghuai Auto Co announced on Wednesday that it expects its factory in Brazil to begin operating in the next year with annual capacity at 100,000 units and total investment reaching $600 million.

It is typical of the efforts major auto firms in China are putting into tapping the world’s fourth-largest auto market, which has been dubbed a bridgehead for Chinese companies to start their global journey.

What intrigues Chinese investors most is the brightening market outlook, as consumer spending is forecast to surgearound the 2014 FIFA World Cup and 2016 Summer Olympics in Brazil.

“A great opportunity” is how JAC vice president She Cairong describes developments in Brazil.

The rapidly advancing Chinese economy has enabled the country’s car producers to extend their global reach with abundant capital and mature technology, said Hayle Gadelha, head of the Trade and Investment Promotion Office under the Embassy of Brazil in Beijing.

It was only in 2012 that Brazil dampened the prospects of Chinese cars in the country by fine-tuning its tariff policy,making it more favorable to local producers but harsher on auto imports. The move prompted Chinese car makers, many of which were already eyeing Brazil, to instead quicken their localizing pace.

A lot can happen in the space of two years, however. JAC is not the only China brand to make a big move into Brazil.

Beijing’s BAIC Motor is mulling investing in an SUV plant, Gadelha disclosed to Xinhua, noting that the plan received a warm welcome from quite a few localities in Brazil.